I’ve been invited to a private “lobster fest” and I’ve got nothing to wear!

What You Need:
Glue gun (use the low heat kind for this craft if you’re doing it with kids!)
Hair clip
Plastic lobster (we got ours HERE) 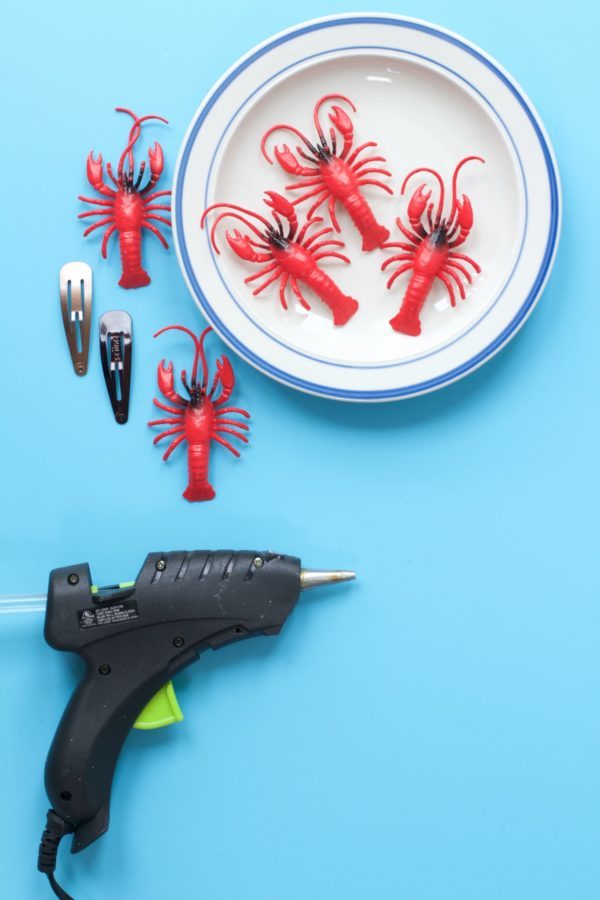 What To Do:
Using your hot glue gun, glue two daps onto each end of your hair clip. Press your crustacean firmly and wait a few minutes. Thats it! Easy and SUPER adorable!

Crafts, How To, Video

When I was a kid I was forced to go to Vacation Bible School every summer. I didn’t have anything against Jesus or the Baptist Church. Where my beef lay was with the questionable snack choices and unimaginative crafts that were not anything I would have chosen had I been on a real vacation.

Things changed the day I was saved a second time when Mrs. Bradley, our spritely art teacher, brought in the craft supplies needed to make snow globes (to be clear, she called them “Bethlehem Snow Globes”). What fun the class had filling jars with small nativity animals, angels, glitter and water! When I put a giraffe and cow boy boot from a Ken doll in my “Bethlehem story”, Mrs. Bradley giggled long enough for me to catch her before she realized she shouldn’t have.

I’ve since been obsessed with anything suspended in water and turned upside down. I thank Jesus for that. 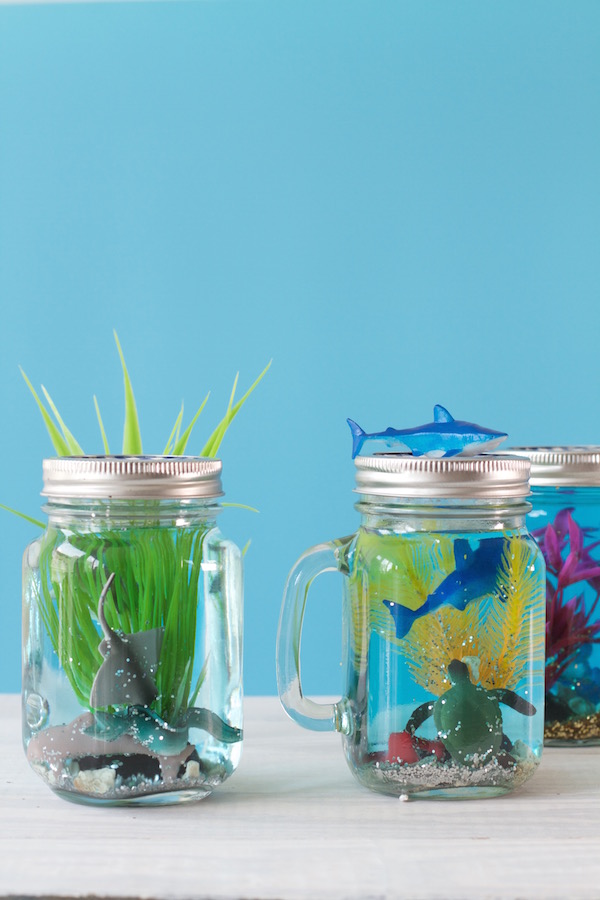 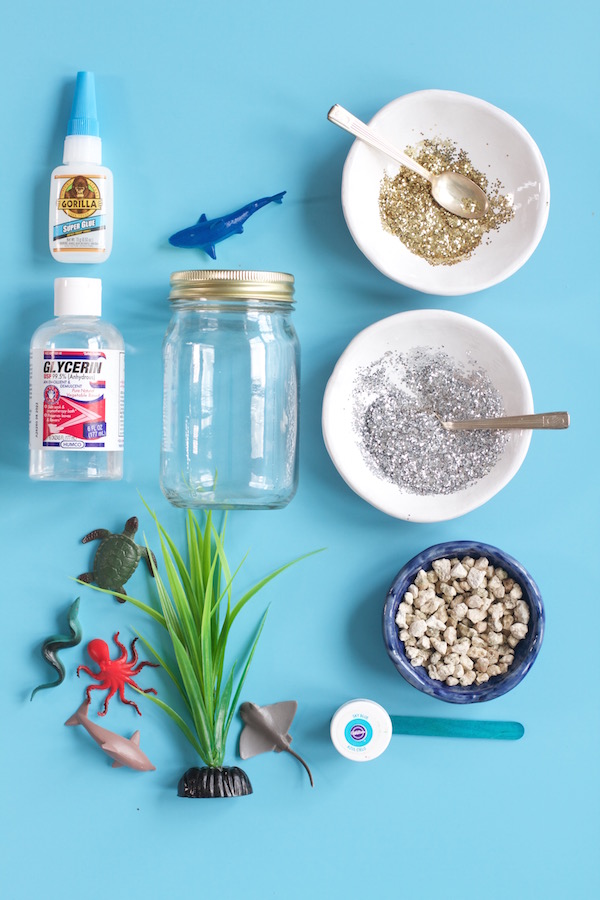 What to do:
1. Using super glue, attach the base of the plant to the bottom of the inside of the jar.
2. Add a few rocks to the bottom of the jar.
3. Add 1 heaping tablespoon of glitter to the jar.
4. Fill jar with water (leaving a 1/2-inch gap at the top).
5. Add a heavy squeeze of glycerin.
6. Stir in the SMALLEST amount of food coloring.
7. Screw on lid and shake!

Watch me make a Sea Globe!

Art, Crafts, How To, Video

Learning to Juggle Or Just Clowning Around? (VIDEO)

I asked my friend Nickity Nack the clown to teach me how to juggle. He said it was as easy as 1, 2, 3. It wasn’t…but it WAS a lot of giggles!!

If you’re like me, you may need a little more help to get your juggling skills rolling. I love this helpful writeup from the adorable Jack Kalvan.
Are you ready to juggle?
The basic three ball juggle can be learned by most people in a short amount of time… maybe half an hour with help from a good teacher or perhaps a few days on your own. Go through these instructions at your own pace. Before you try each step, relax and visualize what you want to happen. With a little practice and patience, juggling will become easy.
Before you start, it’s important to accept that dropping is inevitable. Work on making good throws at first, and worry about catching them later. Many people find that juggling over a bed saves a lot of time and energy in picking up drops.
You may be assuming that you’re going to learn to throw three balls in a circle.
This is called the “shower” pattern and is actually a difficult way to juggle.
Perhaps you can learn it later, but I will teach you the easiest, most basic way to juggle, called the “cascade” pattern. It is shown at the top of these instructions. To learn the cascade, you need to start with one ball…

HOW TO LEARN A BASIC THREE BALL JUGGLE

One ball: learning the basic throw and catch

The first and most important thing to learn is to throw and catch one ball correctly. This is the only move you’ll need to learn the three ball cascade: Hold both hands in front of you with your palms facing up. Cradle a ball loosely in one hand, and lower the hand down by your side before throwing. The goal is to have the ball land in the other hand, so throw the ball up and a little bit across.
Throw using the elbow, not the wrist or shoulder.
Try to throw the ball about as high as the top of your head.
Watch the ball as it reaches its peak in the air, picture where it will land, and then hold your other hand under it.
Do not reach up to catch the ball; the ball will come down to you.

If you don’t catch the ball on the first try, don’t worry. It’s more important to make a good throw and stay relaxed. The catch will follow naturally.
Spend a few minutes throwing one ball back and forth, right to left and left to right. Each time, try to throw the ball to the same height and keep your hands level with each other. Practice until this move is smooth and easy.
Congratulations! You’ve learned the basic move needed for juggling!

Now you are ready for two balls. Hold one ball in each hand. Throw one of the balls up and across the same as you just learned. When this first ball starts coming down, then throw the second ball up and across. Each ball should cross over to the opposite hand. Throw, throw, catch, catch.
Look at the picture at the top of these instructions for proper hand position.
Both balls should peak at the same height (but not at the same time).
Take a pause in between the two throws. Juggling works best when done relaxed and slowly.
Do not throw 1 ball up and then hand the other across. (This is the #1 mistake with 2 balls.)
Practice the two throws and two catches starting with either hand until it feels easy.

First, just hold 3 balls, placing 2 in the hand that you want to start with and 1 in the other hand. Then, the first 2 throws will be the same as you just did with 2 balls… but when ball 2 is coming down, throw up ball 3. If you catch them all, they will each land in the opposite hand from where they started.
Remember, pause between each throw and try to throw each ball to the same height.
Just make 3 throws and then stop and relax.
Congratulations! You are now officially a juggler!

Mastering the three ball cascade
When doing three throws starts to become reliable, don’t stop at three throws, just keep going. When one comes down, throw the next one up Â­ always alternating right and left in an even rhythm. Counting the number of throws can help you track your progress.

Curing common juggling problems
I have three pieces of advice:
1. Concentrate on what you want to happen.
2. Work on consistent, steady throws.
3. Relax.
If you are having trouble catching the balls, think about where you are throwing them. The most common problem for beginners is throwing too far out in front of you. To cure this problem, you need to throw the balls straight up in front of your face. It may help to imagine a glass wall two feet in front of you, to actually juggle in front of a wall, or to try juggling while walking backwards.
The best way to improve your juggling is to practice. The more time you put in, the better your juggling will be.

Crafts, Entertaining, How To, Video

Clowns get a bad wrap. I always thought it was about those oversized shiny red shoes. I’m changing the way clowns are perceived…starting with the feet up! 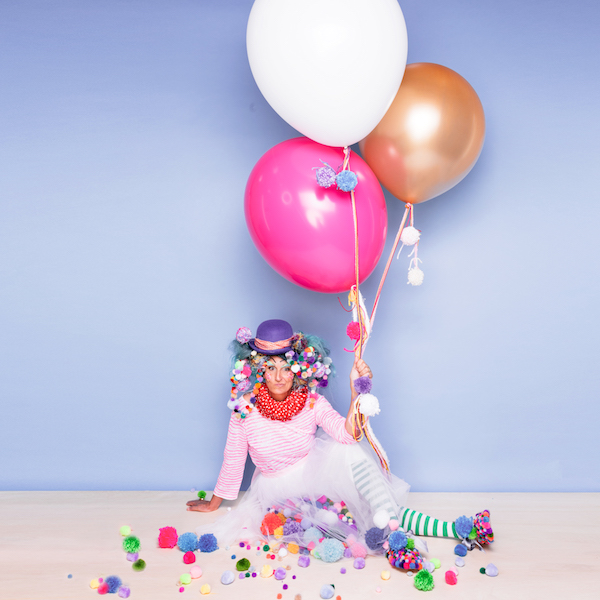 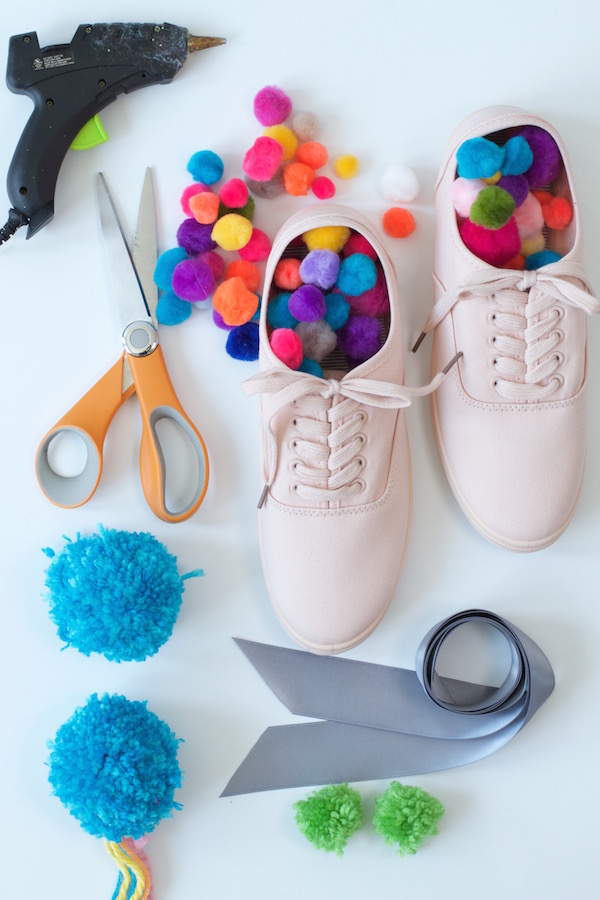 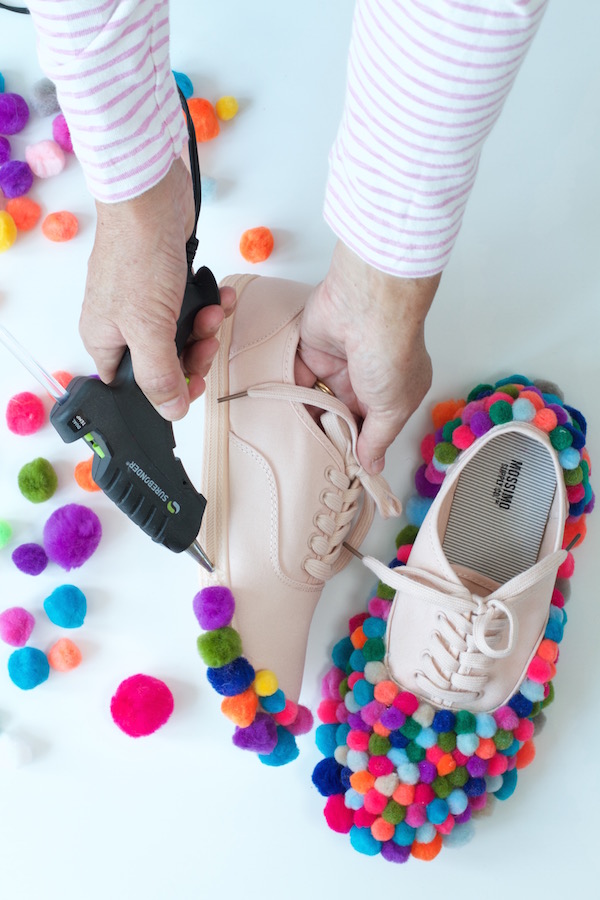 Step One: Using a hot glue gun attach the medium-sized pom poms around the base of the shoe (making sure to leave a little gap from the bottom of the shoe). Then fill in the other area on the top of the shoe and back of the shoe with the small pom poms. Continue until both shoes are covered.
Pro Tip: I pulled all the colors of pom poms I wanted to use together first and separated them into piles of the same color. It made it easier to not use the same color next to each other. 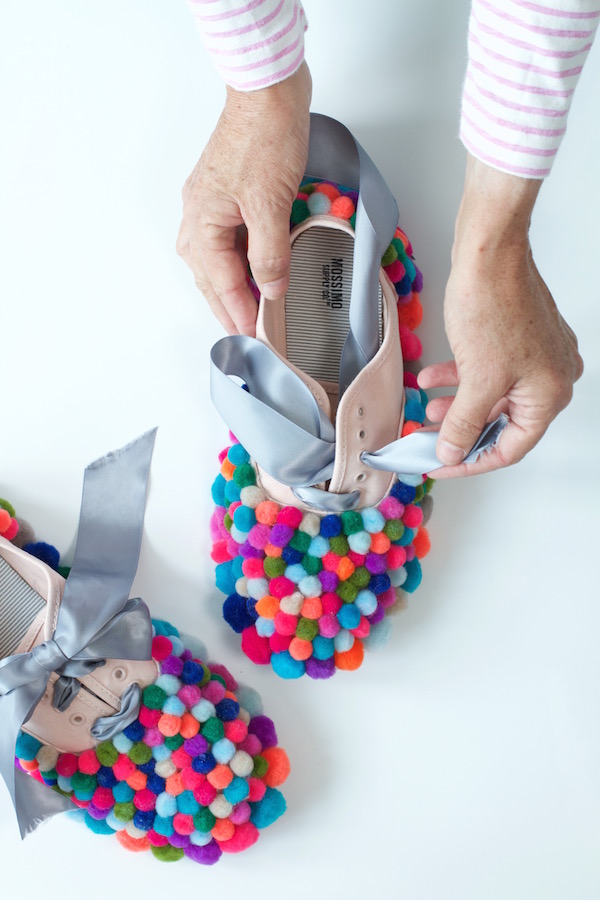 Step Two: Remove old shoe laces and replace them with a big ribbon.
PRO TIP: Never throw away a new shoe lace. They are fun to mix and match between shoes…it’s what a lazy clown would do 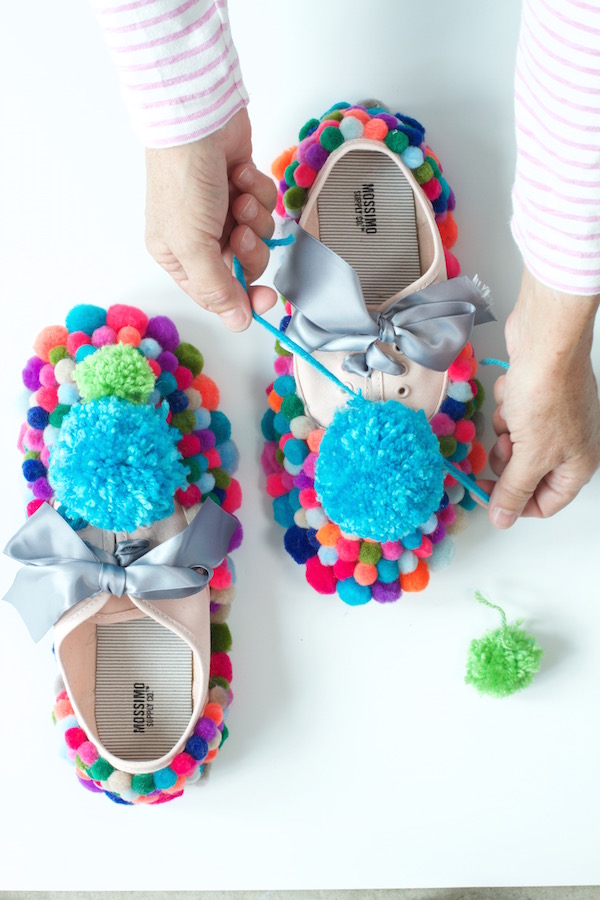 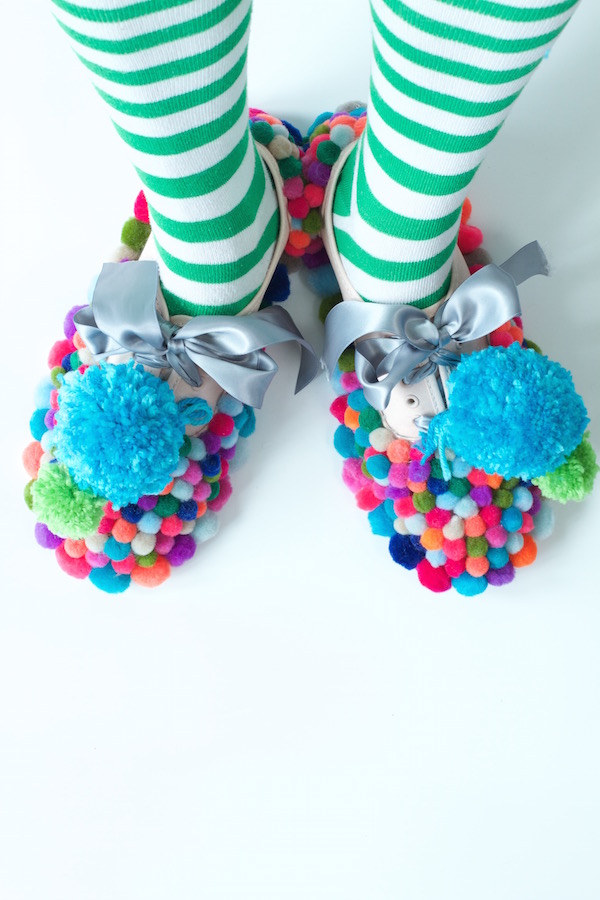 DIY: Key To My Heart Necklaces

I ran across a small bowl of skeleton keys at a local antiques market and thought they would make great necklaces…all they needed was a little Libbie color and flair! Give them to all your girlfriends and save a few for yourself. They look fab when worn in multiples! 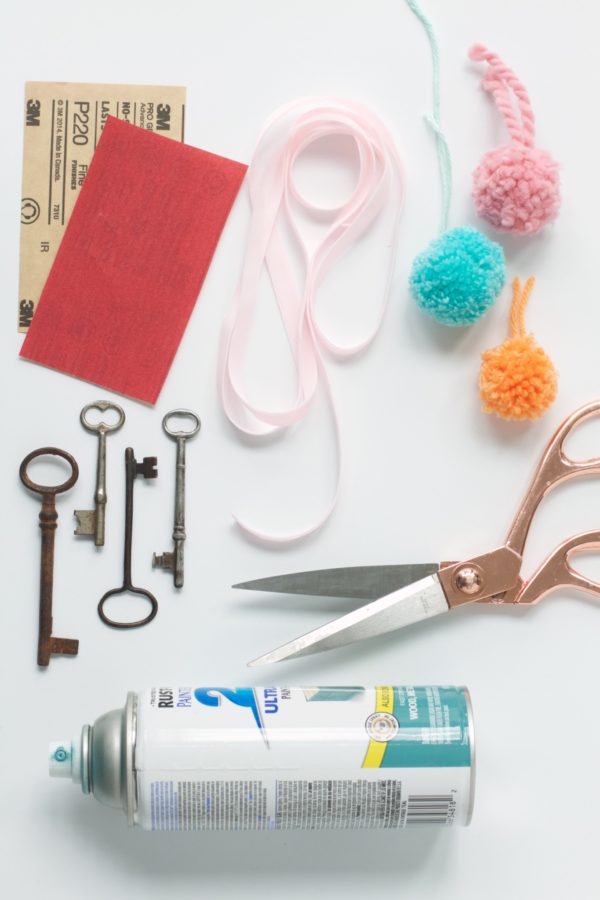 What To Do:
1. Use a fine grit sandpaper to remove rust and tarnish from your antique keys.
2. Carefully spray paint one side of your key, let dry and spray the other side.
3. Measure and cut your ribbon long enough to hang around your neck and tie at the top.
4. Tie your key to the ribbon and attach your small flair. (I used a small pom pom!) 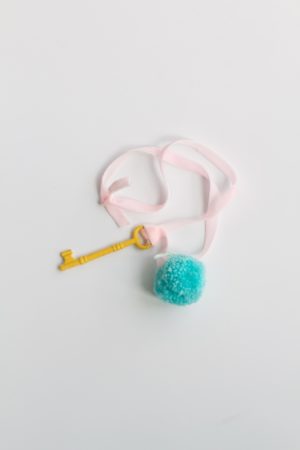 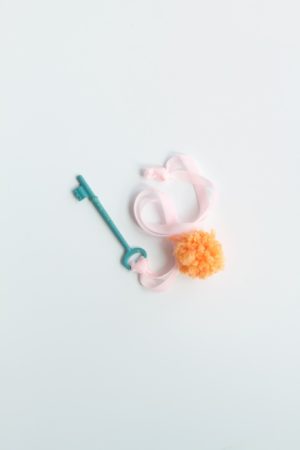 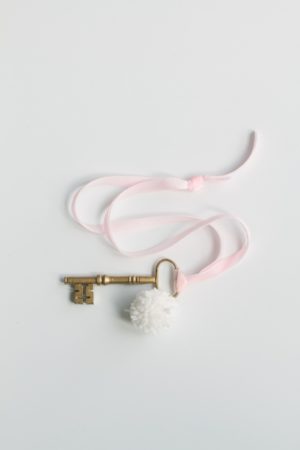 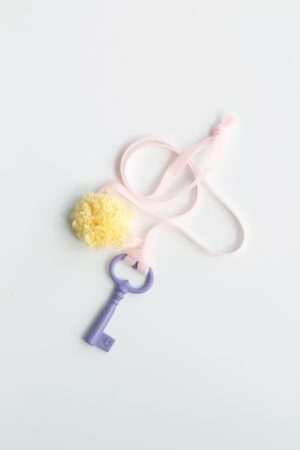 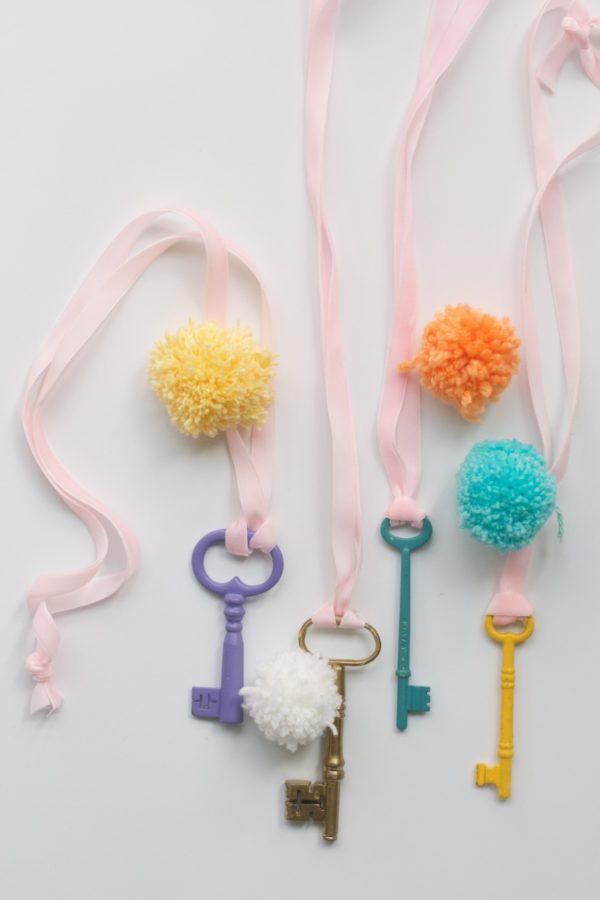