When your event needs a little more POP, here’s an easy and fun removable idea! For this application, I was hosting in intimate dinner party inspired by cherry blossoms. The environment was very organic and I thought I needed to add a bit of a modern twist. Boom. A simple chair decal on a white ghost chair brought it all home…and was so fun to do. 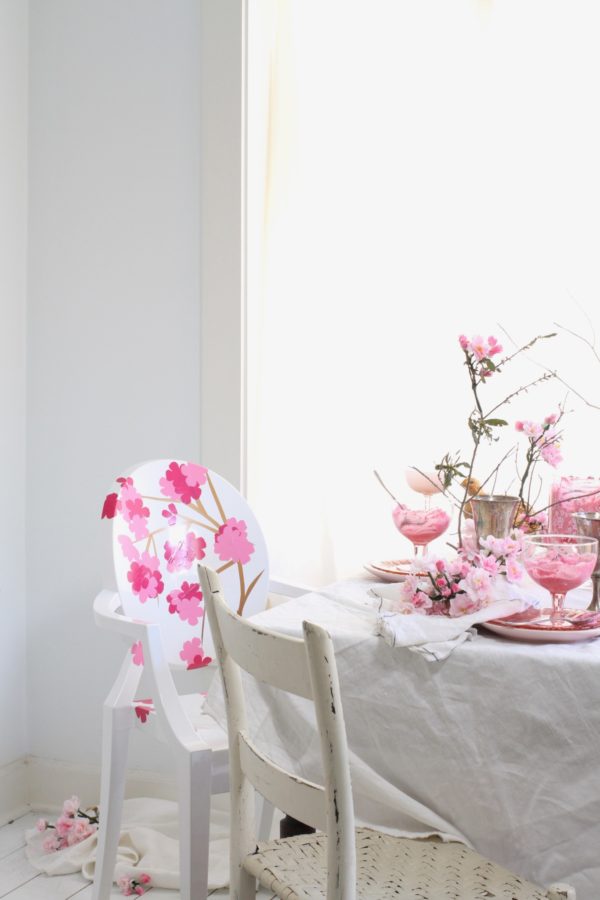 What you need:
1 Plastic chair
Vinyl Sheets (Available at Michael’s Crafts. For this chair, I used one light pink, one bright pink and one copper)
1 piece thick card stock
Pen/Pencil/Marker
Scissors

What to do:
1. Make a Paper Flower Template: Depending on what your inspiration is for the chair (mine was cherry blossoms), Draw a simple outline of a flower, bud and leaf on the card stock and cut out. NOTE: for this application, I did two different sizes of the same flower. Flower were 2 to 2.5-inches in diameter.
2. Cut Out Flower Template: Cut out the flowers, buds and leaves from the card stock.
3. Cut Out Vinyl Flowers, Buds and Leaves: Working on the back side of the vinyl, use the paper templates to draw around onto the vinyl and cut out. Note: for this application, I did a full sheet of light pink flowers and a used the bright pink for buds and flowers. I didn’t cut leaves.)
4. Apply the Vinyl: Do a simple sketch on paper of the the design you want to start with. Beginning with the limbs, cut out strips (1/4-inch wide and various lengths), peel backing off and apply to the chair. Working one at a time, peel off backing from the vinyl flowers, buds and leaves. 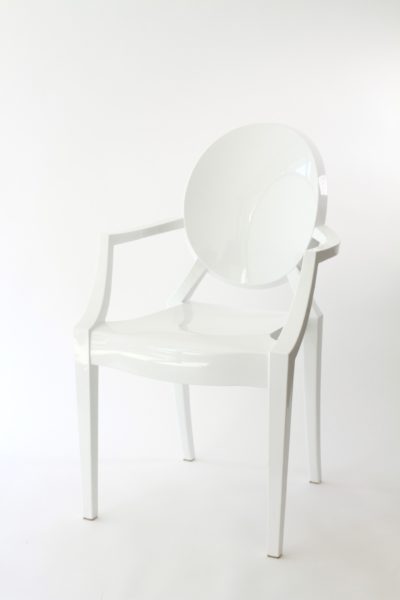 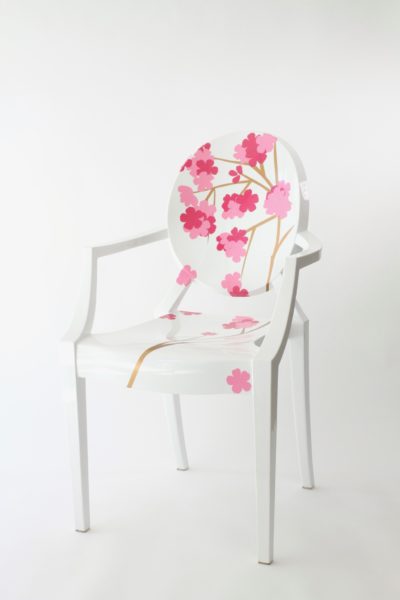 The whole process took me 1 hour and was the perfect modern touch the table needed. 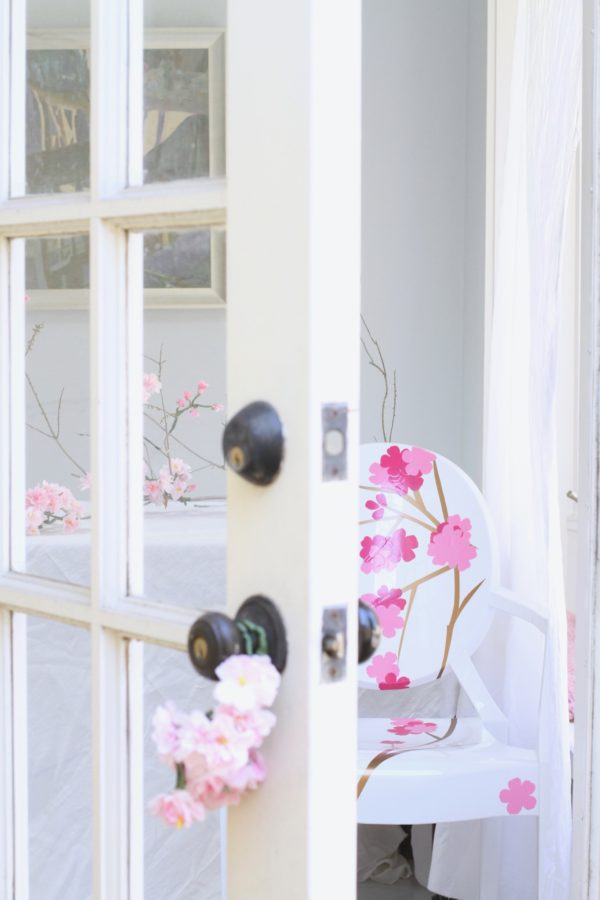 I find inspiration for meals and events great or small in those things blooming and growing around me. This dessert moment is inspired by the delicate beauty of cherry blossoms. 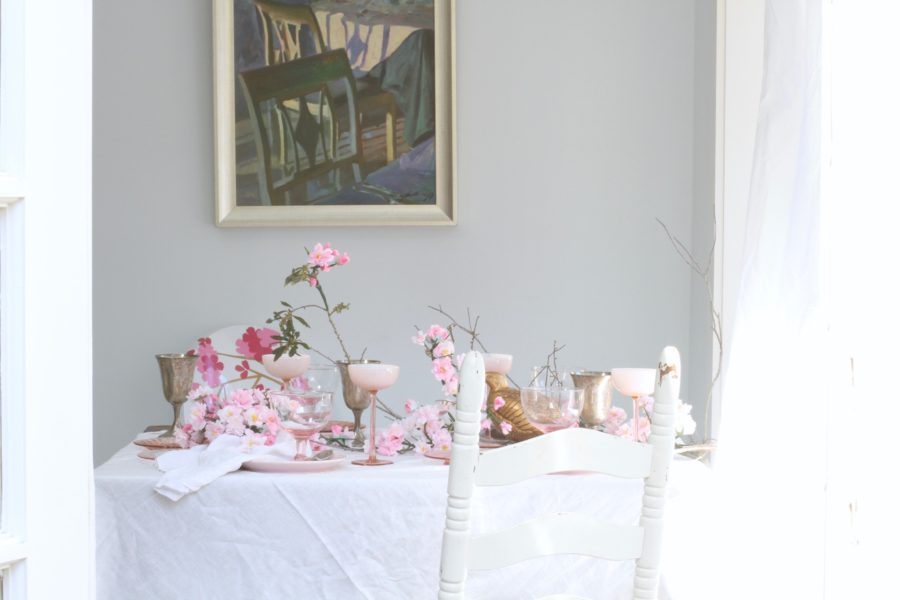 Design, Entertaining, How To, Tabletop, Video

By Libbie Summers
With David Dempsey

Once a year, on Valentine’s Day, Ken takes one for the team. 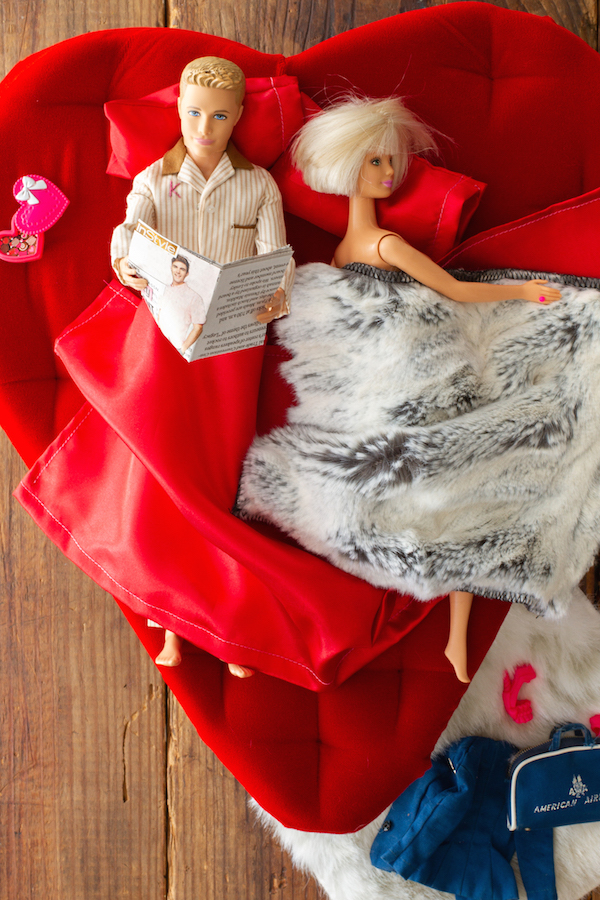 A Dinner Out of Left Field

There are a lot of cool things that happen in Augusta, GA that don’t have anything to do with golf. One of them is Westobou Festival (an ambitious and innovative, ever-evolving multi-arts festival dedicated to enriching the cultural fabric, economic sustainability and social vitality of the Southeastern United States region.)

Over the course of five fantastic days every autumn, the festival transforms downtown Augusta into a vibrant, creative playground where friends, family, neighbors and visitors connect and celebrate infinite creative possibilities. This year, Westobou Festival has started a “meal series” where they pair like minded chefs and artists who will prepare and present meals in interesting, non-traditional venues that employ creative, elevated and unique concepts with rich thematic ties. And guess what! I’m doing one with artist, Leonard “porkchop” Zimmerman. I couldn’t be more excited about this event and getting to spend more time with Leonard and the folks at Westobou. The venue is SRP Park and yep, you guessed it. The dinner will be served in left field. My crew and I are headed to Augusta to cook you “ballpark food” like you never dreamed of. This ain’t no popcorn and peanuts meal…or is it? We are going to CRUSH THIS FOR YOU!!

Cocktails before dinner will be on second base because I believe everyone should get to second base at least one time that night. 🙂 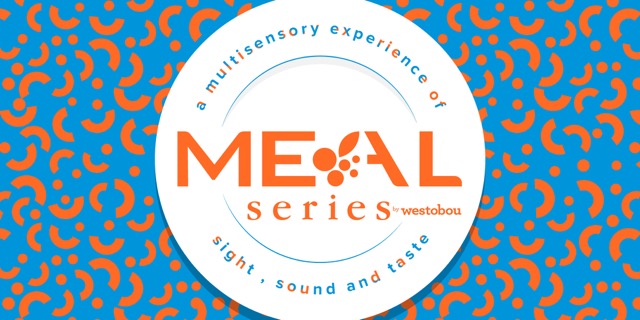 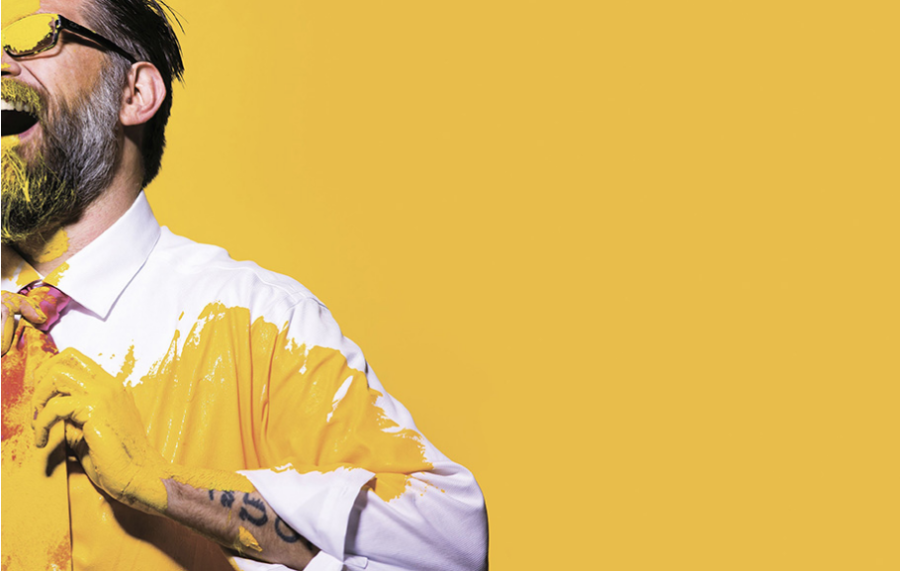 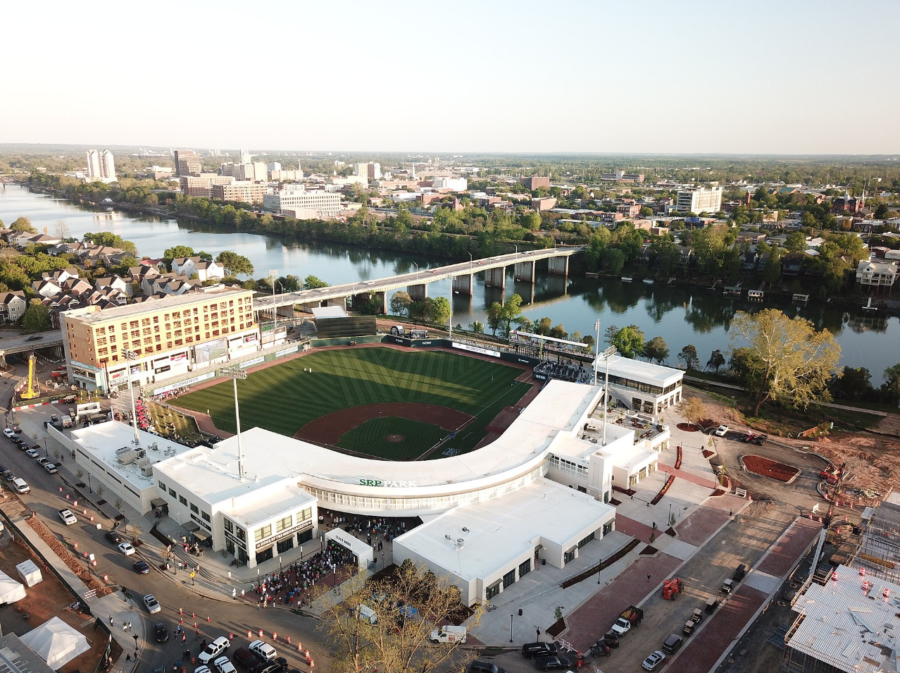 Quite possibly the coolest private dinner venu ever!!

Learning to Juggle Or Just Clowning Around? (VIDEO)

I asked my friend Nickity Nack the clown to teach me how to juggle. He said it was as easy as 1, 2, 3. It wasn’t…but it WAS a lot of giggles!!

If you’re like me, you may need a little more help to get your juggling skills rolling. I love this helpful writeup from the adorable Jack Kalvan.
Are you ready to juggle?
The basic three ball juggle can be learned by most people in a short amount of time… maybe half an hour with help from a good teacher or perhaps a few days on your own. Go through these instructions at your own pace. Before you try each step, relax and visualize what you want to happen. With a little practice and patience, juggling will become easy.
Before you start, it’s important to accept that dropping is inevitable. Work on making good throws at first, and worry about catching them later. Many people find that juggling over a bed saves a lot of time and energy in picking up drops.
You may be assuming that you’re going to learn to throw three balls in a circle.
This is called the “shower” pattern and is actually a difficult way to juggle.
Perhaps you can learn it later, but I will teach you the easiest, most basic way to juggle, called the “cascade” pattern. It is shown at the top of these instructions. To learn the cascade, you need to start with one ball…

HOW TO LEARN A BASIC THREE BALL JUGGLE

One ball: learning the basic throw and catch

The first and most important thing to learn is to throw and catch one ball correctly. This is the only move you’ll need to learn the three ball cascade: Hold both hands in front of you with your palms facing up. Cradle a ball loosely in one hand, and lower the hand down by your side before throwing. The goal is to have the ball land in the other hand, so throw the ball up and a little bit across.
Throw using the elbow, not the wrist or shoulder.
Try to throw the ball about as high as the top of your head.
Watch the ball as it reaches its peak in the air, picture where it will land, and then hold your other hand under it.
Do not reach up to catch the ball; the ball will come down to you.

If you don’t catch the ball on the first try, don’t worry. It’s more important to make a good throw and stay relaxed. The catch will follow naturally.
Spend a few minutes throwing one ball back and forth, right to left and left to right. Each time, try to throw the ball to the same height and keep your hands level with each other. Practice until this move is smooth and easy.
Congratulations! You’ve learned the basic move needed for juggling!

Now you are ready for two balls. Hold one ball in each hand. Throw one of the balls up and across the same as you just learned. When this first ball starts coming down, then throw the second ball up and across. Each ball should cross over to the opposite hand. Throw, throw, catch, catch.
Look at the picture at the top of these instructions for proper hand position.
Both balls should peak at the same height (but not at the same time).
Take a pause in between the two throws. Juggling works best when done relaxed and slowly.
Do not throw 1 ball up and then hand the other across. (This is the #1 mistake with 2 balls.)
Practice the two throws and two catches starting with either hand until it feels easy.

First, just hold 3 balls, placing 2 in the hand that you want to start with and 1 in the other hand. Then, the first 2 throws will be the same as you just did with 2 balls… but when ball 2 is coming down, throw up ball 3. If you catch them all, they will each land in the opposite hand from where they started.
Remember, pause between each throw and try to throw each ball to the same height.
Just make 3 throws and then stop and relax.
Congratulations! You are now officially a juggler!

Mastering the three ball cascade
When doing three throws starts to become reliable, don’t stop at three throws, just keep going. When one comes down, throw the next one up Â­ always alternating right and left in an even rhythm. Counting the number of throws can help you track your progress.

Curing common juggling problems
I have three pieces of advice:
1. Concentrate on what you want to happen.
2. Work on consistent, steady throws.
3. Relax.
If you are having trouble catching the balls, think about where you are throwing them. The most common problem for beginners is throwing too far out in front of you. To cure this problem, you need to throw the balls straight up in front of your face. It may help to imagine a glass wall two feet in front of you, to actually juggle in front of a wall, or to try juggling while walking backwards.
The best way to improve your juggling is to practice. The more time you put in, the better your juggling will be.

Crafts, Entertaining, How To, Video