For one year I sailed with my husband and son aboard our own sailboat. I learned to make this spaghetti alla carbonara in the most unexpected way. Our boat was one of only two anchored off a leeward beach on the island of Barbuda, so it made sense that I would be friendly toward the owners of the other boat when we crossed paths onshore. That’s how I met Patricia. She was
a hard Roman woman—her eyebrows set in a permanent scowl as if the sun were perpetually stinging her eyes. Her English was pretty much nonexistent, but my culinary Italian was just good enough to discern that she was making spaghetti alla carbonara and—surprisingly—that we were invited for dinner! Patricia might not have been the queen of warm welcomes, but I wasn’t going to turn down an Italian meal from a Roman woman. Going aboard Patricia’s boat was like stepping onto a floating butcher shop filled with screaming Italians. There may have been only three people there, but it sounded like a World Cup soccer match was being played onboard. Patricia greeted me (relatively speaking) barefoot, wielding an excessively large knife in her hand and with a glare in her eye (the image still haunts me to this day).

I obediently followed her to the starboard guest cabin, which was cooled and entirely full of hanging meat in various stages of processing and drying. Just as I thought I was at my final resting place, she directed me over to the guanciale and expertly cut off six thin slices. She paused a moment to scream at somebody in the next cabin, and then she walked me over to an enormous cloth-covered round of Parmesan, where, using the same knife, she cut off a large chunk. Twenty minutes and several rounds of screaming later, we sat down to the best Italian dinner I’ve ever had. I still think of Patricia each time I make this carbonara; I wonder where she is, if she’s still living on a boat, still curing and drying her own meats, and if she’s used that knife to kill anyone yet. 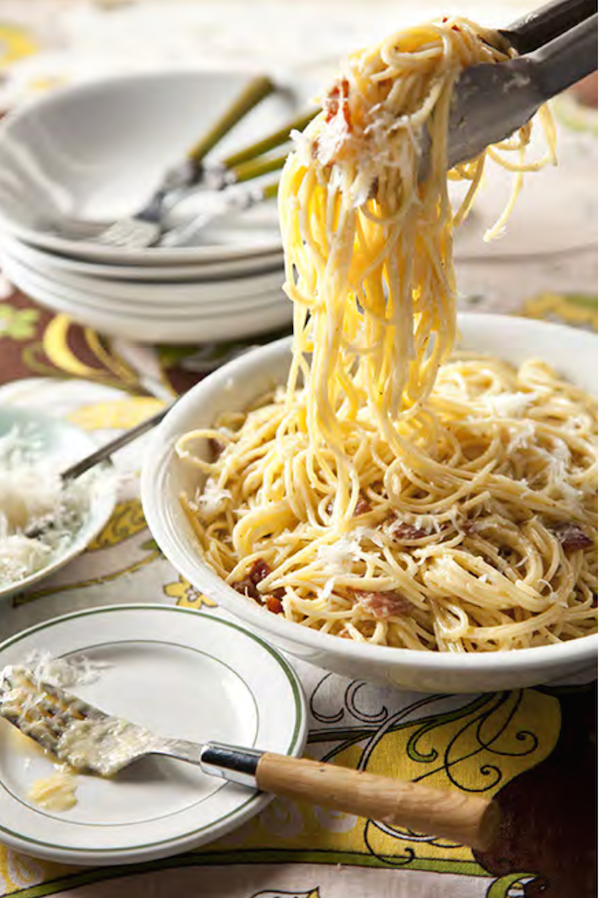 In a large pot, bring 6 quarts salted water to a rolling boil.

In a large skillet, heat the oil. Stir in the guanciale and cook, stirring occasionally, for 6 minutes, or until lightly browned. Stir in the pepper and cook for 2 minutes. Remove from the heat and transfer the contents of the skillet to a large mixing bowl. Let cool slightly.

Add the spaghetti to the boiling water and cook for 8 to 10 minutes, or until it is al dente. Drain the pasta, reserving 1 cup of the pasta water.

Add the cheese and eggs to the slightly cooled guanciale. Using a wooden spoon, vigorously stir the mixture until the sauce thickens to the consistency of mayonnaise. Transfer the cooked pasta (still hot) to the bowl and toss it with the guanciale sauce. Add the reserved pasta water, a little at a time, until the sauce coats the pasta and becomes creamy (you probably won’t need all of the water). Salt and pepper to taste. Serve immediately, garnished with more Parmesan cheese.