Flat breads are an easy intro into bread baking. Somehow, even if you think they aren’t going to work out…they always do! Here are two of my favorites. 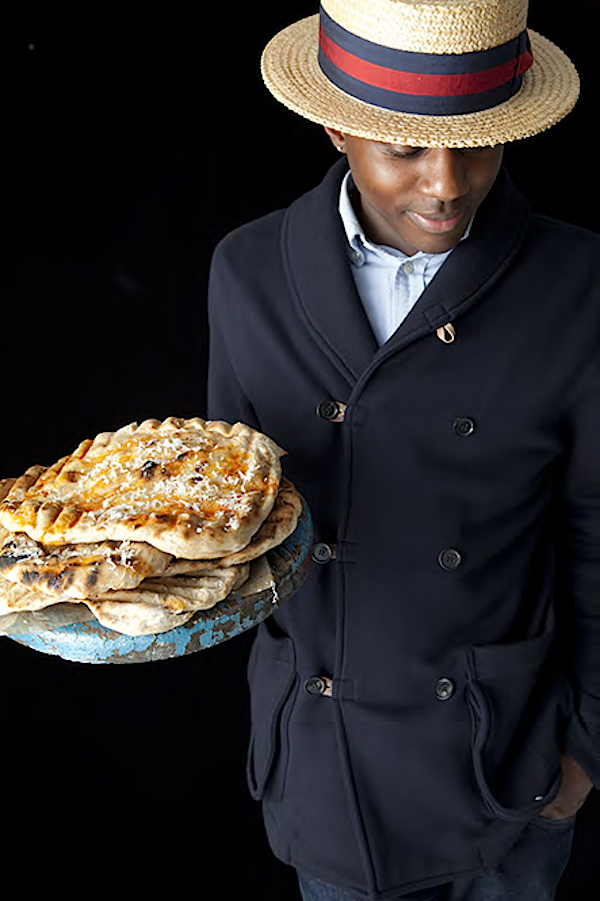 A training bread, if you will. A soft, chewy, simple bread grilled and brought alive with the sweet heat of brown sugar and chile oil. A bread to honor flat-chested girls everywhere. I was once one of you . . . spicy, sweet, and just waiting to rise.

In the bowl of a standing mixer fitted with the dough hook, combine the 1 tablespoon vegetable oil with the water. Add the yeast and stir to dissolve. Cover and let rest for 30 minutes.

Add the all-purpose and whole wheat flours to the yeast mixture and mix on low speed just until a loose, raggedy dough forms. Cover the bowl of the mixer and let the dough rest for 20 minutes.

Add the salt and yogurt to the dough and mix for 5 minutes, until the ingredients are fully incorporated and the dough pulls away from the sides of the bowl to form a loose ball. Remove the dough hook, cover the bowl with plastic wrap, and let rise at room temperature for 3 to 4 hours, until the dough has doubled in size.

Preheat an outdoor gas or charcoal grill to high.

Turn the dough out onto a generously floured work surface. Divide the dough into eight equal portions and roll out each portion to 1⁄4 inch thick (or press with your hands). Don’t
worry about uniformity: the less perfect, the better. Stack
the dough rounds on the bottom of an overturned baking sheet, placing a sheet of oiled plastic wrap between them so they won’t stick together.

Brush the grill liberally with oil and, working two at a time, grill the flatbreads for 2 to 3 minutes per side, until there is a nice black/brown char on the grill side and the top is puffing up. If the dough sticks to the grill when you try to turn it, the flatbread has not cooked long enough.

When the flatbreads are hot off the grill, drizzle them lightly with chile oil (a little goes a long way) and sprinkle with a little brown sugar and cheese. Serve warm. 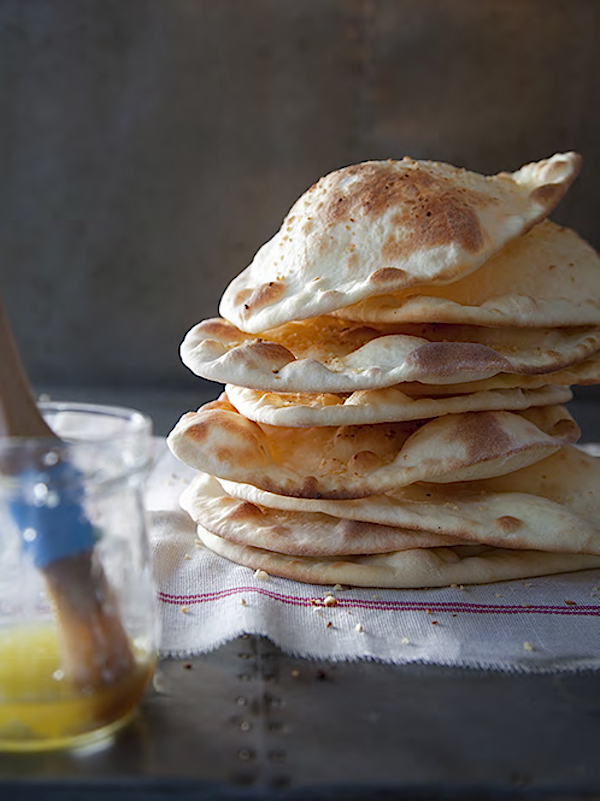 Naan is my yeast-based guilty pleasure. Wherever I may be traveling in the world, I’m searching for this pillowy flatbread with the crisp bottom. If there is a restaurant with naan on the menu, mark my words, I will find it.

Although I have yet to taste dreamy Chef Suvir Saran’s naan (he promises to make me some one day), my favorite naan is made at a seedy back-alley restaurant in the West Indies by a guy named Sanjay (come to think of it, most of the naan bakers I’ve met are named Sanjay). I’ve been lucky enough to land on Sanjay’s island many times over the years while cooking on boats. Even luckier, he has always been around, is always wearing too much cologne, and is always willing to bake me a fresh basketful of naan—no matter what time of day. Each piece of Sanjay’s naan is the size of a roadmap, spilling over the sides of the basket of bread he brings to the table. It has the perfect charred bottom and buttery flavor . . . with just a hint of Old Spice.

Once you start baking your own naan, you’ll quickly discover what all Sanjay naan bakers already know: Naan gets better every time you make it. Like an elastic waistband, the dough is very forgiving.

Use a small bit of the clarified butter to lightly grease a large mixing bowl. Set aside.

In the bowl of a standing mixer fitted with the paddle attachment, combine the yeast, brown sugar, and milk. Briefly stir with a spoon. Let the mixture rest for 5 minutes, or until
it begins to foam. With the mixer on low speed, add the yogurt, 2 tablespoons of the clarified butter, and the salt. Add the flour, starting with 2 cups and mixing well to combine. Gradually add enough flour until the dough forms and cleanly pull away from the sides of the mixing bowl. Mix for 5 minutes, or until the dough is smooth and elastic.

Put the dough in the greased mixing bowl, cover, and let it
rest at room temperature for 11⁄2 to 2 hours, until it has doubled in size.

Turn the dough out onto a lightly floured surface and divide it into ten equal portions. Use your palms to form each into a ball. Cover the dough balls with a towel and let rest for 30 minutes.

Preheat the oven to 500° F. Position one oven rack on the lowest level of the oven and remove or place the other rack high enough in the oven to stay out of your way. Place a baking stone (or pizza stone) on the lowest rack. Have a spray bottle of water and a cooling rack ready.

Stir the garlic into the remaining butter.

Roll each piece of dough out (or pat the dough out with your hands and fingertips) to an 8- to 10-inch circle. Pull one end of the dough to form a teardrop shape. Brush the dough lightly with the garlic butter. Working with one shaped piece of dough at a time, carefully place it on the hot baking stone and spritz the dough with water. Bake for about 4 minutes, until brown spots start to form on top and the dough begins to puff up. Remove the naan from the oven and brush again lightly with the garlic butter. Repeat the process with the remaining pieces of dough, keeping the cooked naan covered and warm until ready to serve. At my house, the naan doesn’t stand a chance of getting cold. Every piece seems to disappear as soon as it comes out of the oven.