A Tassel in the Desert

For 10 days, back when I still considered 30 old, I rode atop a spirited horse in the desert of North Africa. Through spits, squints and squats I saw nothing but an ombre of brown.

Khaki, buff, coffee, beige –”Try and think of as many words as you can to exchange for brown,” I’d whisper to myself in an attempt to take my mind off the pain coming from the working end of my saddle. These shades of brown were the color of my world until I saw him when I approached camp on the eighth night. The long colorful yarn tassel that hung from a thick woven band he wore around his neck was the first thing that caught my eye. He was introduced to me as Fula.

Fula was a handsome boy with reddish grey hair that had a lilac cast when the setting sun hit it. He was thinner than he should be, but so was everyone I had met on this trip. Fula was elusive and proud at first, something I chalked up to a language barrier OR my body odor repelling him –it could have been either. He chose to stay in his tent during dinner that night, but came out after and sat quietly by my side.

I got to see Fula for the final two days of the riding trip. He’d run out to greet me as my horse came closer to camp –his colorful tassel swinging back and forth in time with his lengthy gate. After dinner, we’d play games and laugh until I collapsed onto my cot and he took his place on a brick colored rug just outside my tent.

I heard Fula let out a little whine as I rode off on the last day –I just couldn’t bring myself to look back. Squeezed around me in the Jeep speeding away from the browness of camp were the men I’d been on this adventure with. Most good men, but the better man of all was the four legged Azawakh named Fula that I left behind in the desert.

Today, now past the age of what I once considered old, it’s Fula I think of with each yarn tassel I tie and the joy that color and a dog can bring to a desert of brown, oatmeal, tan, mushroom, taupe, biscuit, fawn… 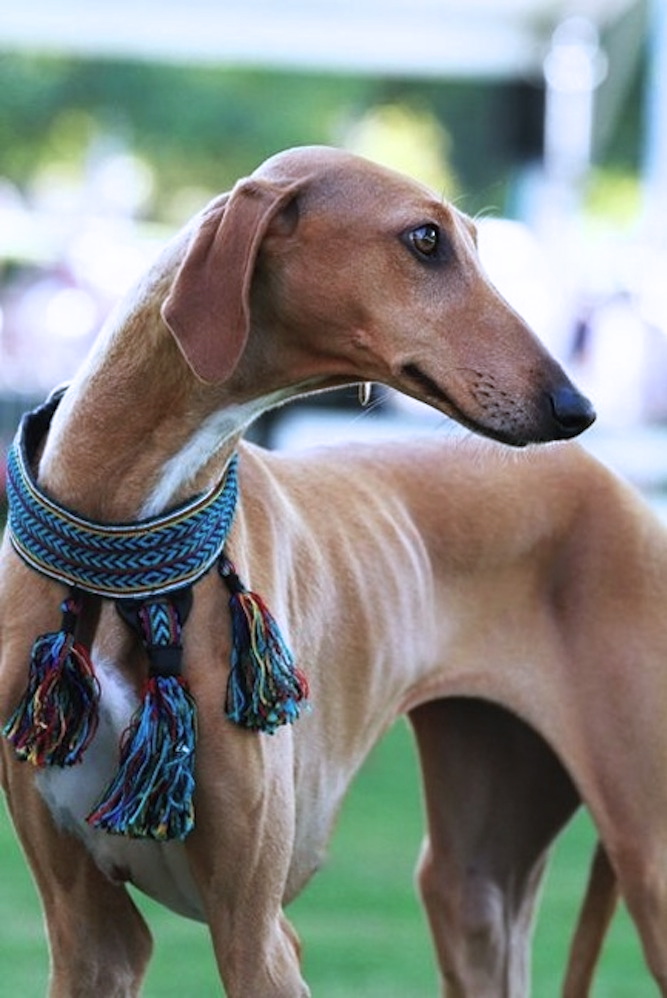